Doing weird things in the name of art!

THIS PAGE IS NOT UNDER CONSTRUCTION!
WE'RE CONSTANTLY CONSTRUCTING.

The ArtPolice is a collaboration. We have no rules.

If necessity is the mother of invention...

What is the father?
The answer is...improvisation! 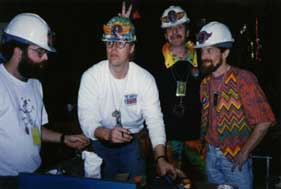 A "butt-crack" Krewe of Art Police
from left:
Philippe - Are We Really? - Rheingold - Zim
In the background are Marty and Matisse and Fasman and
the Parallel Gurl in her parallel world.
I think Mame is there and JudyJudyJudy
and Zoe & Rowan and Kim
and Hilarie and Tex and all of those Art Police
who have gone before us or in front of us
or around us or through us . . .
including Helvetica. 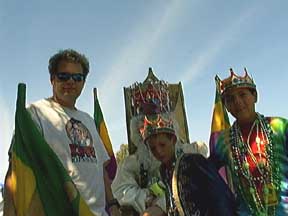 Many of these art projects were produced in conjunction with
Peter Barsotti andBob Barsotti
from Bill Graham Presents in San Francisco.

Are We Really? and The Art Police
want to thank them for supporting our efforts
and providing the opportunities.

We also want to thank Grateful Dead Productions
for allowing The Art Police and other Krewes of Deadheads
to express our art during their shows.
It was indeed a long strange trip!


Many of these works of art used to reside at
The Psychedelic Shop
1098 Market Street in San Francisco
which is now closed.