Helvetica is Kathy Lassen-Hahne...
wife of Freddy Hahne & Are We Really? 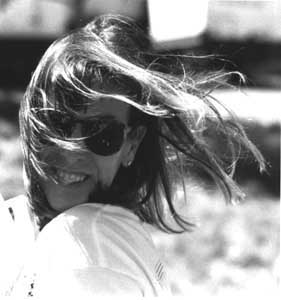 Helvetica is the wife of my life! She is called Helvetica because once upon a time Hannibal marched into the Alps with his army on elephants to free the slaves from the Roman Empire. Upon freeing the slaves, Hannibal named the alps the "Helvetica Territories". Helvetica is a Carthiginian or Greek word that means freedom! Switzerland eventually evolved in the Alps... Helvetica (freedom) became a part of its social consciousness. The Swiss have always considered themselves to be a free nation. You will find the word Helvetica on signage, postage stamps, in hotels and railway stations. In 1953, a Swiss type designer re-designed the typeface News Gothic. He made the font more rounded, more legible and "cleaner". The new typefont had more character than the old News Gothic and consisted of an entire family of styles and weights. The new typefont was called Helvetica.

In the late 1960's and early 1970's, I studied Industrial Design with designers from Switzerland who encouraged the use of the typefont Helvetica because of its legibility.

In 1975, my then-to-be wife came to visit at an apartment in San Francisco I was sharing with her good friend. I was not there at the time so she left me a note. On the wall of my room was a type chart from a company who produced typography for the advertising and design industry. All of the type fonts were listed by name on the chart. My wife-to-be signed the note by choosing the name Helvetica from the type chart..."Very truly yours, Helvetica."

I have called her Helvetica since receiving that note.

She is Helvetica Terrific! She has that type face.

Helvetica or Kathy Lassen-Hahne as she likes to be called at work, was the director - advertising and promotions for McGuire Furniture Company in San Francisco. She has also held positions as Director of Advertising for GUMP's, a legendary San Francisco retail store, and as a marketing communications manager at Royal Viking Line, once the preeminent cruise line in the world.

Helvetica currrently is happily living after as ChezHelvetica.