The Bozos were originally created

for the 1995 Mardi Gras Celebration

at the Kaiser Auditorium in Oakland 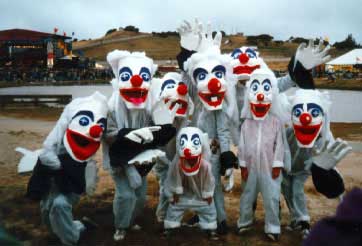 The Bozos at BGP's Laguna Seca Days in Monterey

The Bozos were designed to be worn

by the Art Police so we would become

the art. Many of our previous projects

were extremely large and cumbersome.

The Bozos are light, easy to move around

in and fun to wear among a large crowd of people. 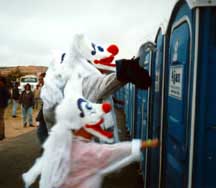 The Bozos pranking the port-a-potties at Laguna Seca Days.

There are eight Bozos - six large heads with hands

and two small heads for kids to wear. The heads

and hands are fabricated from cardboard

using the Zim technique and painted

with acrylics, the hair is fiberfill,

and the jumpsuits are paper! 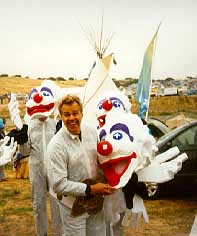 Are We Really? a Bozo?

The Bozos have appeared at the following events: