New Orleans by the Bay
an event produced by Bill Graham Presents
at Shoreline Amphitheater
in Mountain View, California
every June 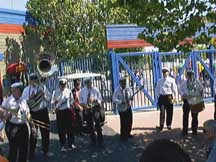 New Orleans by the Bay is a New Orleans style Mardi Gras, Cajun festival featuring several stages, much creole cookin' of wild beans and rice, barbecue chicken and beef, crawfish by the bushel, and of course alligator and ettouffe. A wild Carribean rum drink called a Hurricane is the drug of choice and of course lot's of yummy micro brew beer to chase away the heavy voodoo spirits.

Shoreline Amphitheater is the house that Bill and the Woz built at the southern end of the San Francisco Bay in the heart of Silicon Valley. You can still see Woz sittin' in his booth playing computer games with his pals while the action rages on... but Bill left us a while ago. In his wake is the highest of times conjured by the creative direction of the Barsottis who concieved these wild scenes.

They were inspired to add a parade through the large outdoor facility at the height of the afternoon. A dozen large floats and festively costumed inviduals toss Mardi Gras beads and gris-gris to the voracious crowd. Many of the floats are Art Police collaborations. 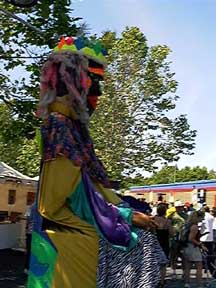 Marie Lavaoux, the Queen of Voodoo is, a large puppet sitting on her thrown. Created first for a Grateful Dead Mardi celebration along with the Vineman, she sits among the crowd at the entrance eyeing each and every attendee. Marie Lavaoux ruled New Orleans at the turn of the twentieth century. She was the most feared among all of the voodoo queens. Born somewhere in the carribean of Aftrican slave parents, people still go to her grave at the edge of the French Quarter and mark an X on her grave stone or leave an offering on one sort or another to appease her spirit. 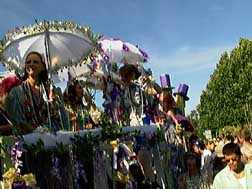 The Parade is staged in the late afternoon with the crowd estimated around twenty thousand people. Apprximately one hundred and fifty people push, ride and monitor direct the parade through the crowd as the costumed float riders toss hundreds of gross of gris-gris beads and trinkets to the screaming, demanding onlookers.
Some flash, others just wave to get the attention of the bead throwers. 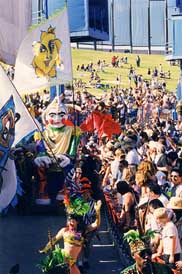 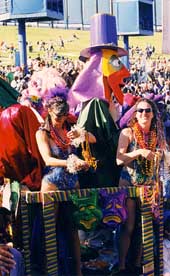