The Jester first appeared in the late twentieth century
at Kaiser Auditorium in Oakland
during a Mardi Gras celebration inside a Grateful Dead show,
and later at New Orleans by the Bay
at Shoreline Amphitheater in Mountain View, California
. 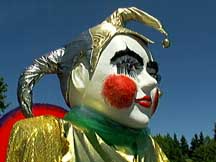 New Orleans by the Bay is a large outdoor event
produced by the fine folks at Bill Graham Presents
featuring the music and food of New Orleans
with performances by Dr. John, The Neville Brothers,
and many other wonderful Zydeco, Cajun, Blues and Gospel performers. 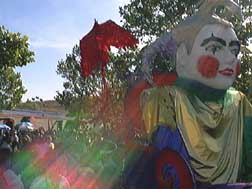 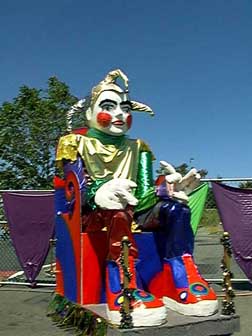 The Jester was only one of eight large floats that were
accompanied by troops of elaborately attired conga dancers
and drummers with the jugglers and the clowns
as they all did tricks for you even if Bob Dylan
wasn't playing at this venue for another two weeks. 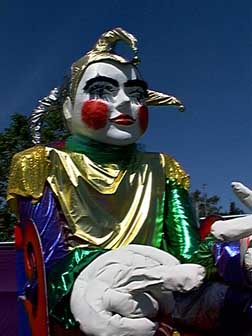 He's a Big Boy when you look at him right. 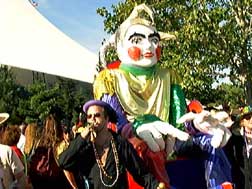 The Jester rolls through a crowd on a 4 x 8 deck
affectionately known as the skateboard that is controlled
by a four person Art Police Krewe. 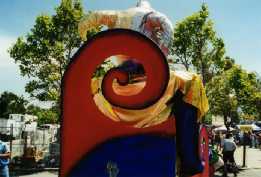 And that's the way it is.

Click this link to see what
New Orleans by the Bay is all about.