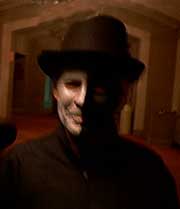 After several months of rainy day after rainy day in California, this Friday, March 10 was a full-tilt Sunshine Daydream. The stormy skies cleared by ten am offering up a bright blue sunny sky. The temperature at its peak was like our friend of the devil, in the low sixties. A bevy of... no, a long line of tye-died in the wool Deadhead, Phil Zoned, What's Next on this strange trip people stood on the sidewalk beside the magnificent concrete Kaiser with it's vast concave porticos sculpted with dreamy figures. The view across the road is Lake Merritt preceeding the Berkeley and Oakland Hills in the distance.

Once the sun set on this most welcome day, the scene inside was set for a four hour repast of Phil & Friends.

Standing in line is an exercise in schmoozing with friends, some of whom you have never met before, but have known since you were first turned on to this experiment. Many of the people only see each other here. Some of us come searching for the holy grail, others are riding the cosmic giggle. We relish in the vibe and seek the music. We are tribes of varying degrees, some only two or three deep, some extensive with wide reaches. Light Pole #7 is a replica icon representing the gathering point for a virtual tribe of seekers from the online community known as The Well. Well Deadheads who see the dayglo number seven know from where they hail. Like a headlight on a south bound train, Light Pole #7 provides the illumination to allow a brief face to face encounter. 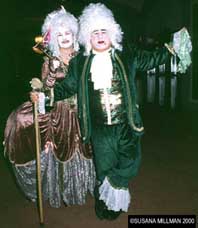 While Phil & Friends were entertaining the troups, a hearty core of Art Police and BGP krewes were preparing the Ballroom above the concert for an apres-concert presentation of a proclamation in honor of the sixty year old Phil. The beautiful Kaiser Ballroom was about to become the surreal scene of the proclamation. Decomposition was the theme as his Wavemeister transformed into Wolfie Mozart. He was led by

The Golden One while the Wooden One, sitting atop the Box of Rain fiddled the tune Box of Rain accompanied by the string quartet seated onstage. The large box was pulled into the Ballroom by the High Countess with help by two MadHatters. The female string quartet from the San Francisco Symphony were taught the tune by Woody shortly before the event. Rain indeed did fall from the Box as it rolled into the Ballroom. 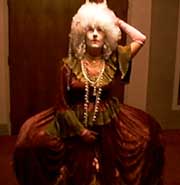 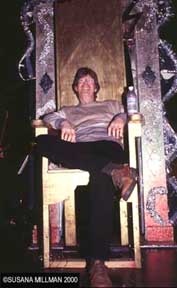 As 1:45am rolled around, Phil was seated at the foot of the stage in front of the quartet who had been playing Bach, and Beethoven before Phil arrived. Emerging from the Box, Wolfie and the High Countess cajoled the birthday boy with retorts about his life and its effect on this particular segment of humanity. Wolfie extoled the virtues of decomposing himself for two centuries as the High Countess let out a whoop of "Ohhhh Woolfieeee" from time to time. 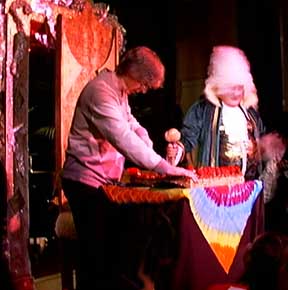 Phil graciously accepted the congratulations, acclamations and proclamation as he proceeded to cut a large birthday cake with the precision of execution he doles out on his music. 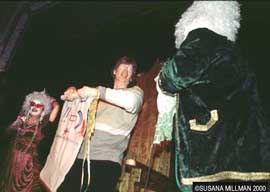 And that's the way it was... or at least as much as we remember it.

Several of the photos are from photographer extraordinnaire, Susana Millman http://www.mamarazi.com