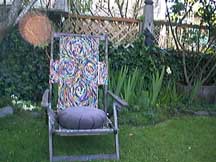 Church convened as usual in the
Rheingoldian earthly garden
where Spring has sprung
and no one was sitting
in this chair! 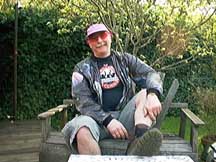 Having donned the appropriate Rheingoldian attire, the imminency of the moment was overwhelming for some of us. The sun was about to set as the moon was about to rise. Our collective consciousness was approaching critical mass, or is that Maas?

Enduring this winter was not as easy as any of us will lead you to believe.

Please don't think for a minute that we were not psyched about this adventure. The Church of Mt. Tam was peaking attendance-wise on this unique day. Ten followers had assembled to take the trek, to test the trail, to trip toward the there!

As you can see by the images at the right, and the left, when we eventuallymade it to the top, we immediately sat down. 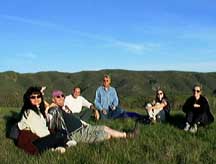 The experience was simply overwhelming. What is it about hiking to a remote point that causes one to stop and reflect, to space out,

to dig the views? We broke out into song, we called forth the spirits to beam the cosmic energy toward our friends and family who needed the often not so gentle push of the... cosmic giggle.

Then all of a sudden the setting Sun's rays converged into a single wave length so powerful it started to burn a hole in the planet right where we had sat down. The energy was so intense none of us were able to move. We were spell bound. It was like a scene out of the X-Files, or a Stephen Speilberg movie. There was no explanation for what were now experiencing. Someone questioned whether it was a sign from God... nah... it's the aberation inside the lens.

So we split, admiring the fantastic colors painted so gently on the sky as we walked back to from where we came. The pinks and blues and purples bending up and over the horizon lighting the wispy clouds were as psychedelic as any microgram of Owsley any of us had remembered. Perhaps this was the promised flash back about which we had been warned!

The Sun set out over the west sinking deeply into the Pacific Ocean where thoughts of Maui filled our heads. Darkness rapidly fell along with the temperature.

Our spirits remained high because we had witnessed another fine cosmic event that was setting up another. From sunset to moonrise in the blink of an eye if your eye blinks at the rate of forty-three minutes per blink.

As your intrepid reporter headed back toward the mother ship, south over the Golden Gate Bridge into San Francisco, the Vernal Equinox Full Moon popped its large round head up over the opposite horizon as the sun we witnessed setting off into the west.

The trusty old Apple Quicktake 200 camera was held out the window as the Waldo Grade provided a view of shaky proportions leaving more trails in the wake than Heinz has pickles, or is that Owsley had acid? 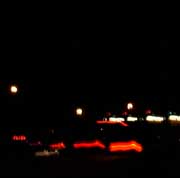 Then one moon after another starting popping up over the horizon. Were all of the fantasticlly conceived science fiction notions coming to life? Did the laser beam from the sun burn right through the earth and split the full moon in three? What is this world coming to? Where are we? What is it about this Church of Mt. Tam?